This article has been written for a great cause, and M&C would like to play a role in supporting Fatma, a victim and survivor of domestic violence.

What is your first reaction when a young woman tells you she’s getting married?

Is it fear? Shock? Disbelief? Pity? Doubt? Or simply joy?

When Fatma Ahmed first told me that she was getting married, I felt a little tug in my heart. It was a feeling of uneasiness. There was something about the look in her eyes that left a mark inside of me.

When she spoke, she sounded very convinced. She described her soon to be husband as a man who genuinely loved her. He had proposed twice already and she had declined. But this third time, she had accepted, even though she did not love him.

She had accepted because she was almost 26 years old and in her small village, this age suggests that she’s getting old. She feared that no man would want her as she got older. And her parents reinforced her fear. So, what is a girl to do but surrender to the commands of family?

She described this man as a kind, hard working and open-minded man. He knew about her job and ambitions and he supported her fully.

I have known Fatma for almost 6 years. I first met her when I was at the beauty salon getting my weekly treatment. She is manicurist and pedicurist among other things. Over the years we became friends and maintained contact.

I was always blown away by Fatma’s progressive zeal to learn, grow and better herself. Perhaps her will to persevere no matter what, reminded me of myself, and I was keen to support and encourage her to keep going.

Despite working 9 to 10 hours a day, she enrolled herself in various courses such as English, physical therapy and fitness training. She would go to the homes of celebrities and wealthy women to offer her services in the comfort of their own home. She developed her own flyers and business cards and was keen to grow and become something big.

Fatma was the main breadwinner in her family. She paid for her 21-year-old brother’s schooling, her fathers’ debts, and mother’s medical bills and for the toys of her nephew, the son of her sister who had recently been divorced.

Leading up to the wedding day, Fatma began preparing tirelessly for the big day. She started working extra shifts, saving money, collecting items, accepting gifts and borrowing money from all the people that she knew. She was preparing her dowry ranging from blankets, linen, kitchen appliances, heaters, clothes, table cloths, towels, etc.

The big day arrived and she was the most beautiful bride I had ever seen. She looked so happy and wild like fire. She settled for a small wedding and danced on the tops of cars in the street, sending me pictures of the big day.

About 10 months after the wedding, Fatma delivered her first child, Youssef.

Soon after Youssef’s birth I saw Fatma less frequently and when I saw her she seemed tired and carrying a big weight on her shoulders. She remained respectable and did not talk much until one day, I saw a big mark on her forehead and I asked her what it was. And I wish I hadn’t.

Fatma unloaded her bag of troubles and told me about how her husband had changed after the marriage. He comes home late, past 3 in the morning, and demands Fatma to wake up and prepare his dinner and eat with him. If she is not hungry then it means she ate too much during the day so he banned her from eating during the day and ordered her only to eat when he is around. He told her she got ugly and fat after the wedding and that he was tricked in choosing her. When he walks around the house he points his finger at parts on the floor that need to be scrubbed and tells her to obey his command. When she talks back at him, he tells her to look at the floor while talking to him, and asserts how he is the man of the house and she has no right to talk back to him or say anything at all. And the list goes on.

Upon hearing this, I did my best to remain calm and sensitive to this woman’s need for compassionate listening. I asked her what she was planning to do about this.

She shared with me that although she wanted to ask for a divorce and went back to her parents home crying almost every night, her parents would send her back to her husband. Her father said that he will not accept having two divorced daughters. And her mother told her that she needs to endure the pain and suffering for the sake of her son, just like she had endured the beatings from her husband. And so Fatma agreed. And I remained quiet.

In our next meetings, Fatma’s light spirit was stuck under a barrage of physical pain, verbal abuse, physical abuse and mental degradation. She was complaining to me of increased headaches, dizziness, fainting, numbness, indigestion and many more physical symptoms. And this was my queue to take a stand. I talked to Fatma about how our physical pain is a reflection of our mental and emotional pains. I talked to her about her rights as a woman, mother and a wife. I talked to her about breaking the pattern of submission to the man and being a powerful woman that stands not only for her rights but also the rights of every single woman in this country.

Still Fatma’s broken spirit could only worry about what she would lose. She told me how she did not want to lose all her dowry, which cost her close to 100,000 Egyptian pounds. She told me her parents would throw her out on the streets, just like they do every night when she goes to them crying and begging for them not to send her back to her husband.

Seeing how her fear was getting in the way of her power, I invited Fatma and her son to stay with me in my home for as long as she needs. I told her that she is like my sister and my home is open for her. I asked her to forget all the dowry, just as though there had been an earthquake or fire; pretend that it’s all burnt to ashes. And suddenly she was filled with a contagious spirit, energy and power. A power to make the impossible, possible.

With a renewed sense of energy, Fatma went back home and demanded a divorce. When her parents knew that she would leave whether they agreed or not, their attitude changed and they began to support her. She told her father that she is prepared to go and stay in the new home which he was building even though it’s on brick and mortar without water, electricity, doors, windows or bathrooms. Just bare brick. Her father agreed.

Hearing this, I vowed to help Fatma build her new home so that she and her son can have a decent and respectable life, one that honors the life of a woman and that of a mother.

Fatma has lost all her dowry and needs our help. Her new home needs a lot of work to be built and when complete, it will need all sorts of furniture, appliances, ceramic, bathroom set up, tiles, and so forth. Fatma’s baby is now 6 months old and he also needs a bunch of clothes and toys.

If you would like to contribute to helping Fatma build her new life, please email shama@yallayogacenter.com. 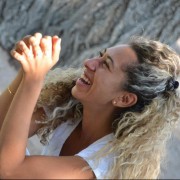 How to Stop a Cold From Spreading at Home